Another day of rain. A heavy storm was moving through the area so we waited until a little later than usual to hit the road. Despite missing the heaviest of the rain, it was still pouring a few miles after leaving.

The route today had a mix of highways and rural side roads, with the latter being much nicer to ride on. The highways here all have speed limits of 70 miles an hour, and with the wet roads the cars flying by are a constant loud drone. Much quieter once you get onto the side roads.

A couple hours of riding in the rain brought us to the town of Columbia Falls where we stopped for a late lunch of Chinese food. Another heavy storm rolled by while we were inside so we waited it out before getting back on the road.

More back roads as we headed north of the direct route – US 2 – and took a state highway then quiet roads through pine forests and by log cabins until the entrance of Glacier National Park.

We got pretty lucky with the timing of our arrival in Glacier. Every year the iconic road in the park – Going to the Sun Road – gets covered in heavy snow and needs to get plowed then repaired. There’s a period of a few days to a couple weeks where bicycles are allowed on the road but cars aren’t, but you can only go as far as the plows have cleared, and you can’t pass any road crews repairing the road. They finished plowing the road all the way through just two days ago, and we’ll be riding on a Sunday so it seems like we’ll be able to ride it all the way through!

We found a campground in the park with hiker/biker sites and set up camp just in time for the rain to start once again as we took shelter under a tree while eating our dehydrated meals.

Notes from Donald: “A few days ago plows broke through the ‘Big Drift’ so I’m really excited that we can bike the full distance of Going to the Sun Road. Today we are in Glacier National Park!” 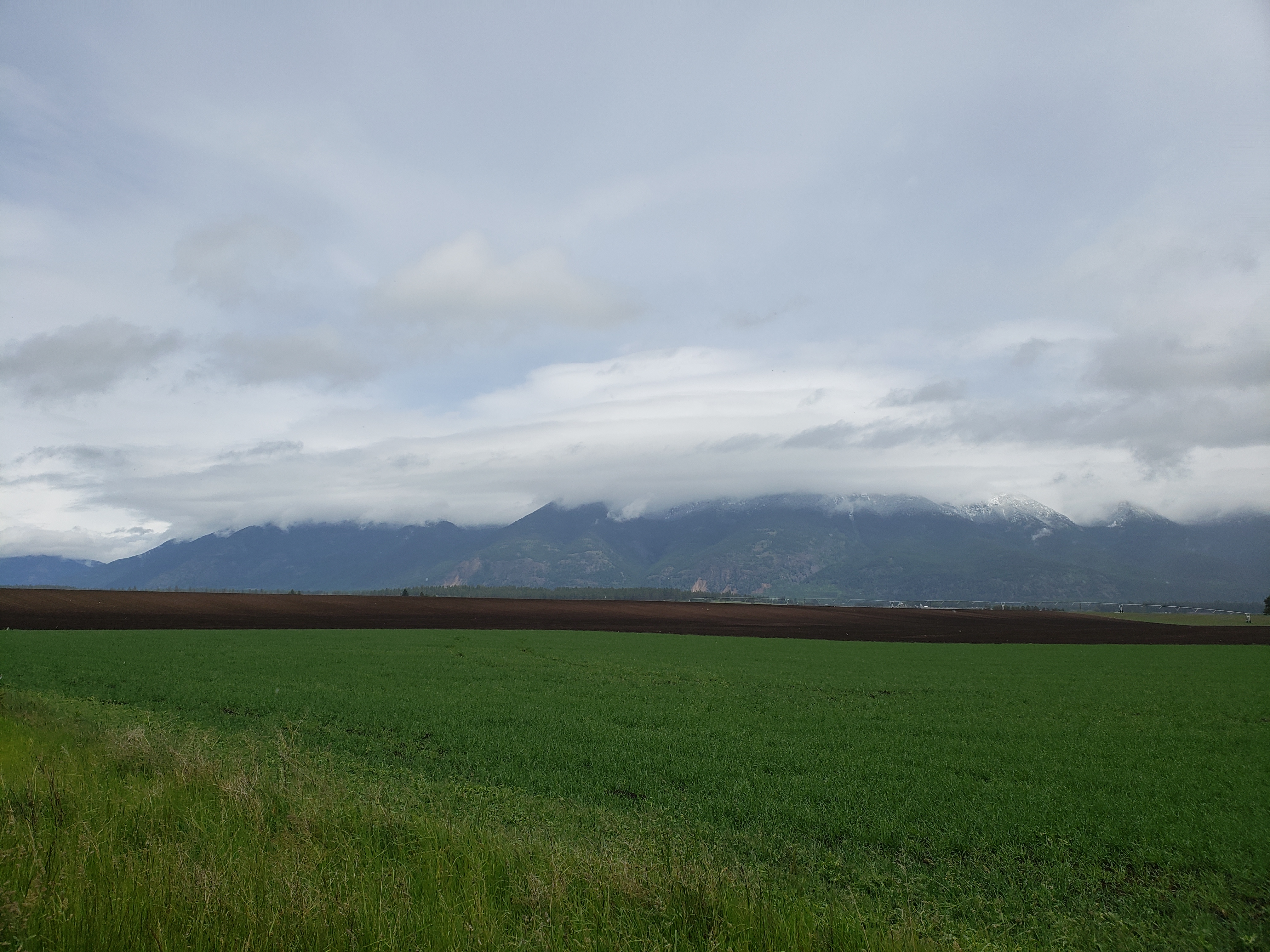 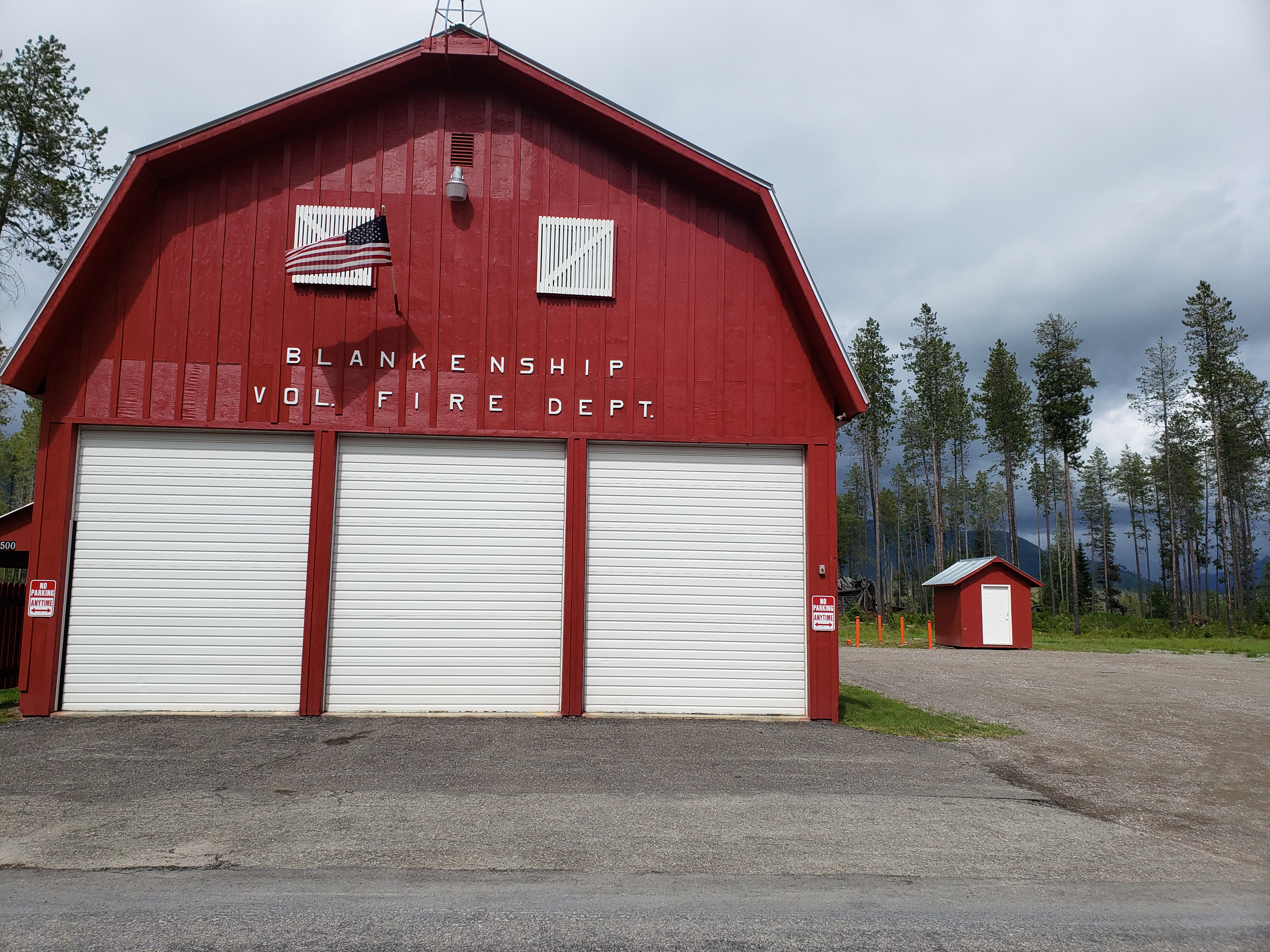 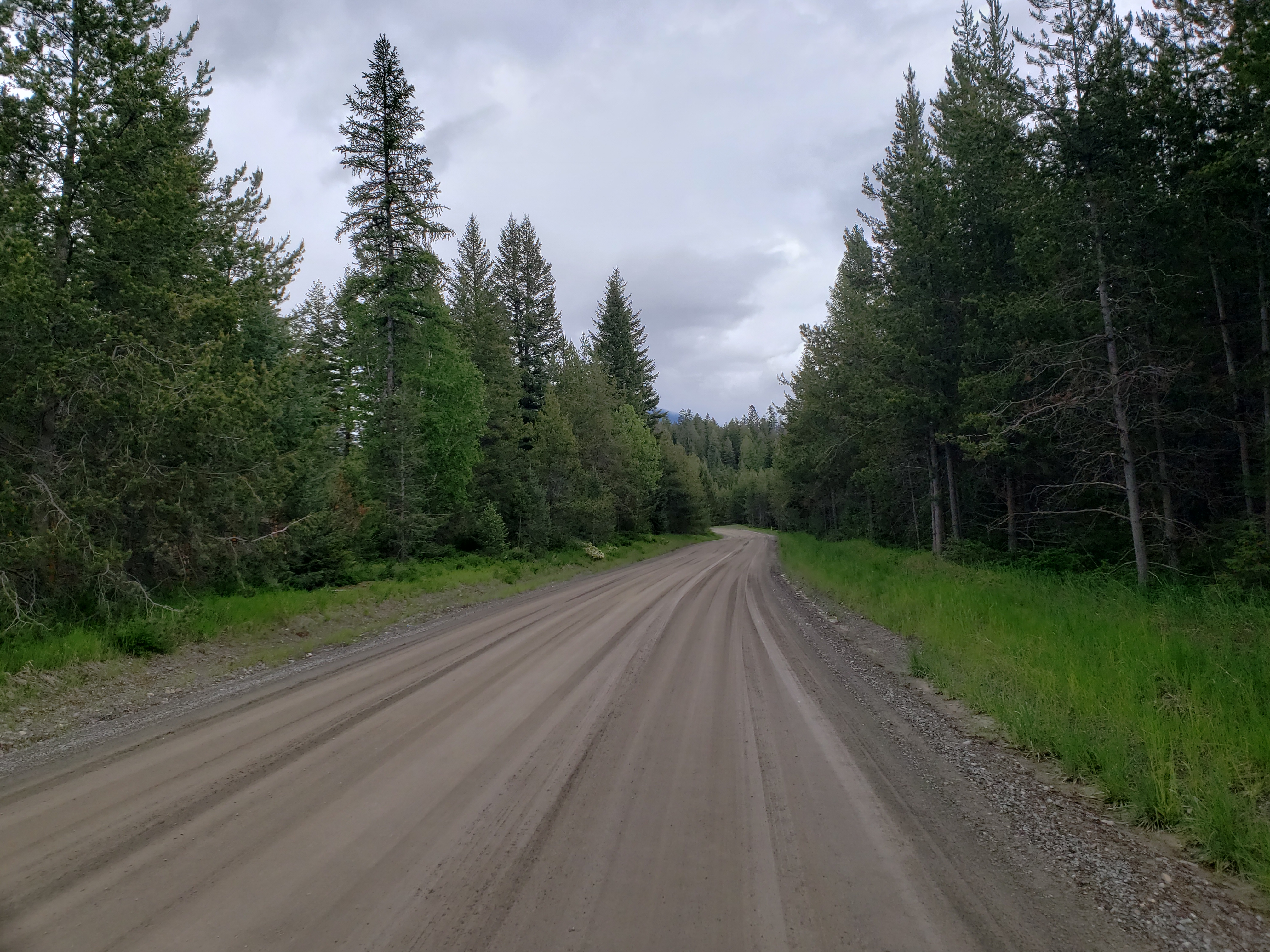 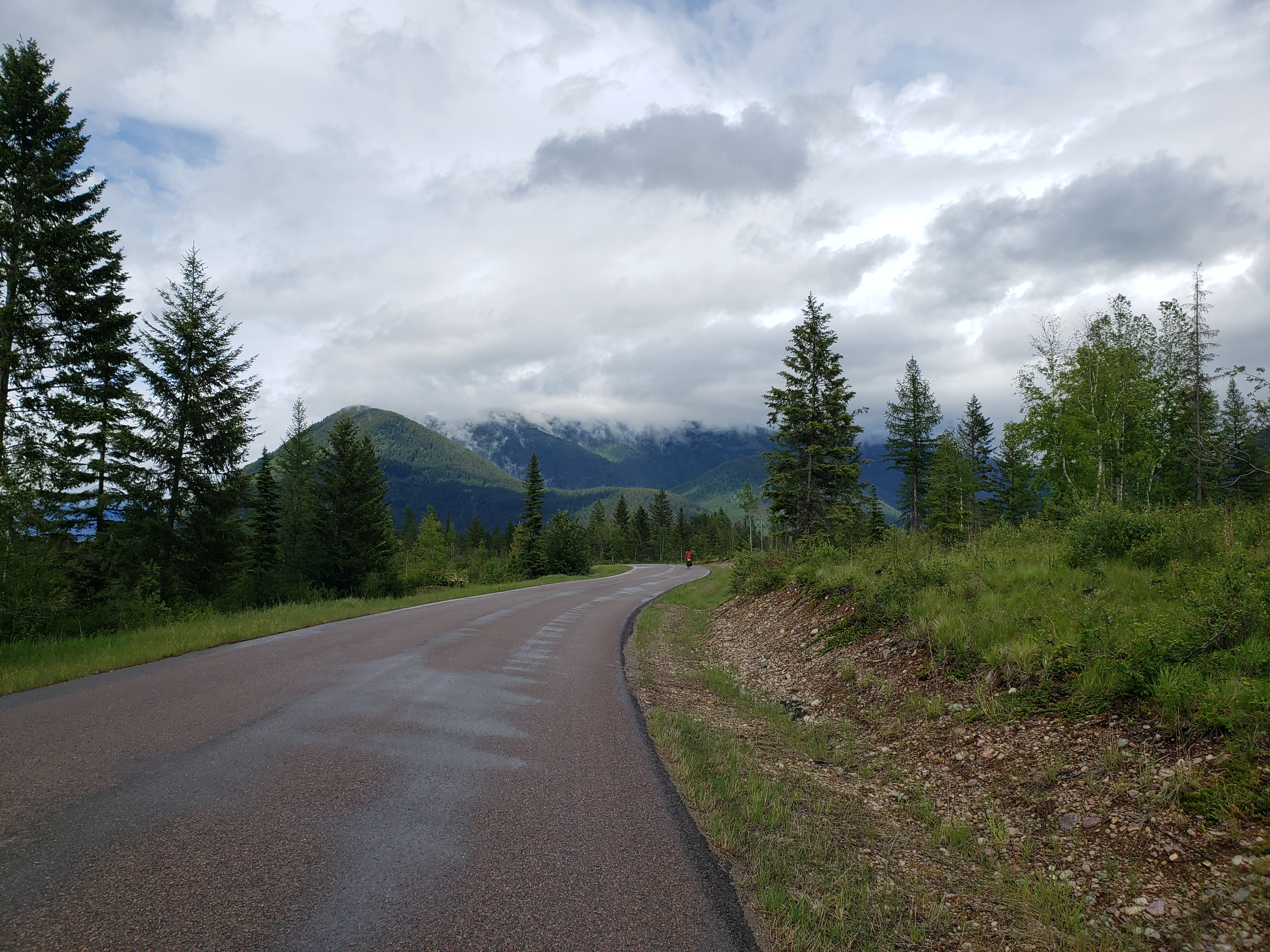 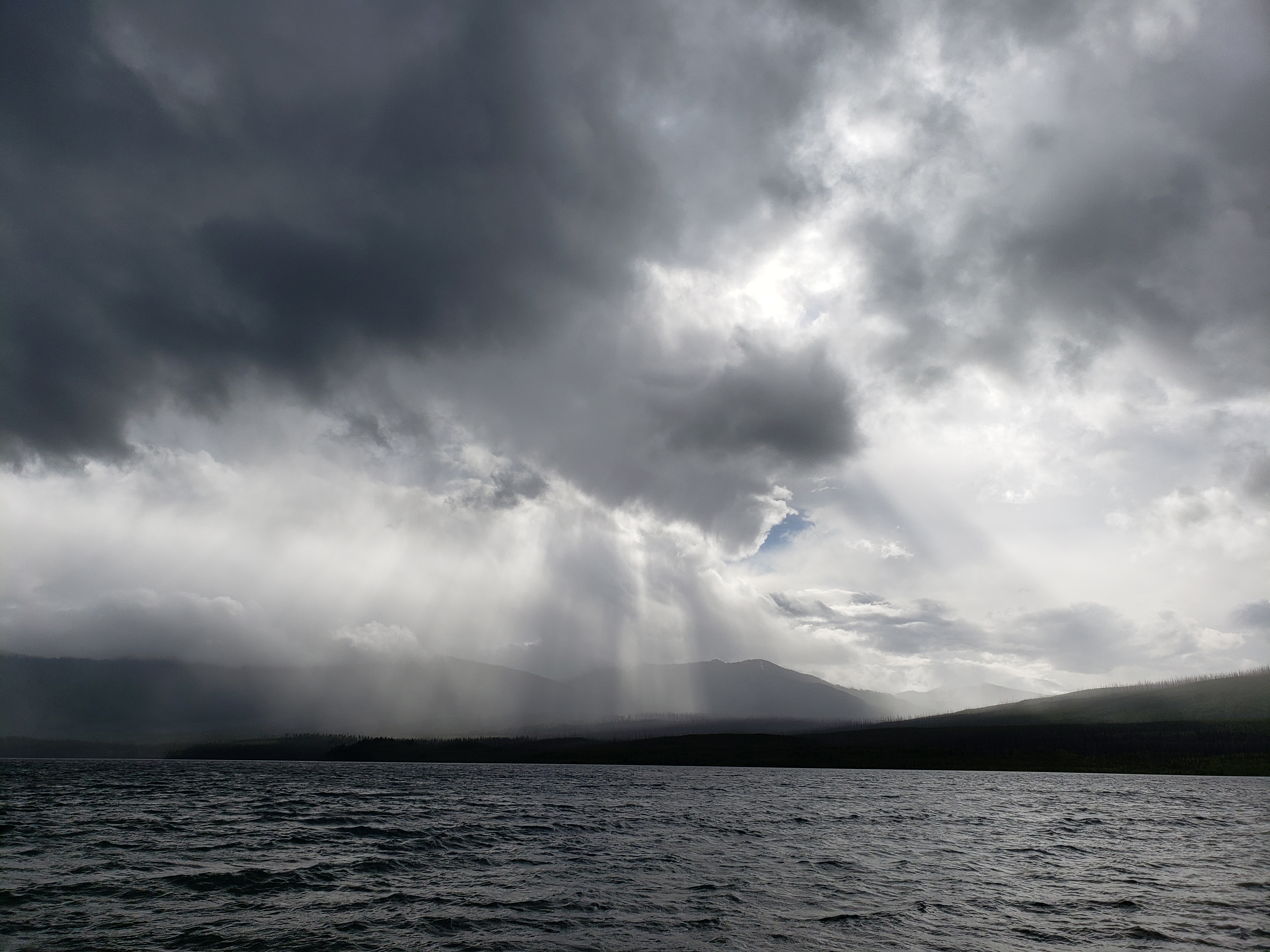 A cold morning. The route for today was simple – get back on highway 83 headed north and find a place to stay near its terminus.

The forecast called for only a 15 percent chance of rain, but a few miles in we knew that was far too optimistic. Dark clouds filled the sky to the north and west and before long it started raining then hailing. Luckily the rain only lasted half an hour and we made it to the town of Condon for lunch.

I was pretty tired today – maybe just from lack of motivation. The road was certainly going through some nice areas. Pine trees lined either side of the road and every so often we passed a lake on the left revealing pine-covered mountains to the west. And more rarely a meadow would appear on the right giving views of much more impressive snow-capped mountains where the recent precipitation had left a clear line of snow in the trees.

But the views weren’t everything. The road today had a shoulder of 0-12 inches most of the time, and the speed limit was an astonishing 70 miles an hour on a twisty mountain road with many blind corners and hills. The stupidity of this combination was clearly revealed through the sheer number of white crosses that appeared by the side of the road, marking fatalities along the roadway. You’d think the community or Montana DOT would catch on to this correlation, but apparently not yet. So needless to say I spent most of the day just wishing I was off of this road.

We came upon a turtle in the middle of the road trying to make its way across and pulled over into the grass on the side to try and rescue it. Cars continued to whizz by from either direction as we held our breaths. A number of cars managed to avoid it but a truck clipped the side of its shell, sending it flying and twirling through the air, smacking back down on the pavement. It’s hard to tell if the turtle was injured much, but it definitely did urinate all over the roadway from the shock. Donald grabbed it and delivered it to the other side of the roadway and we wished it well.

After a long day we finally were able to turn onto a side road which took us to the town of Bigfork. This town is doing rather well – seems to attract a fair number of tourists and all of the parking spots downtown were filled up. Onwards to Glacier National Park tomorrow!

Notes from Donald: “This lake country of Montana is beautiful but riding on the road through it makes it hard to appreciate. I’m glad that road is behind us now.” 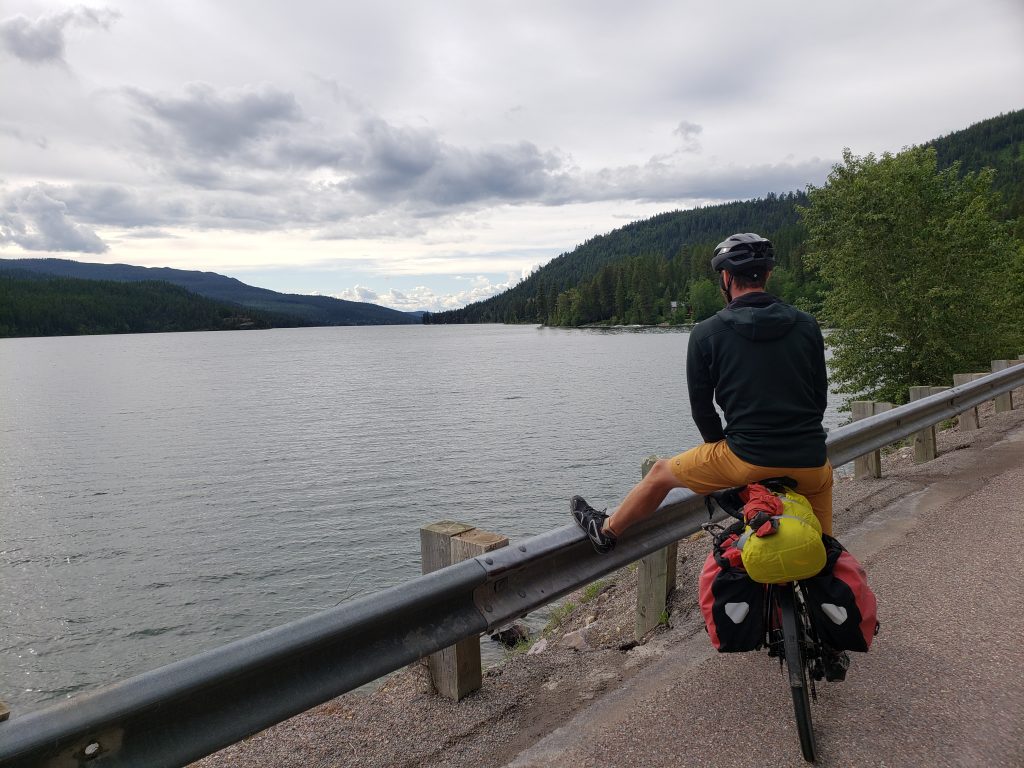 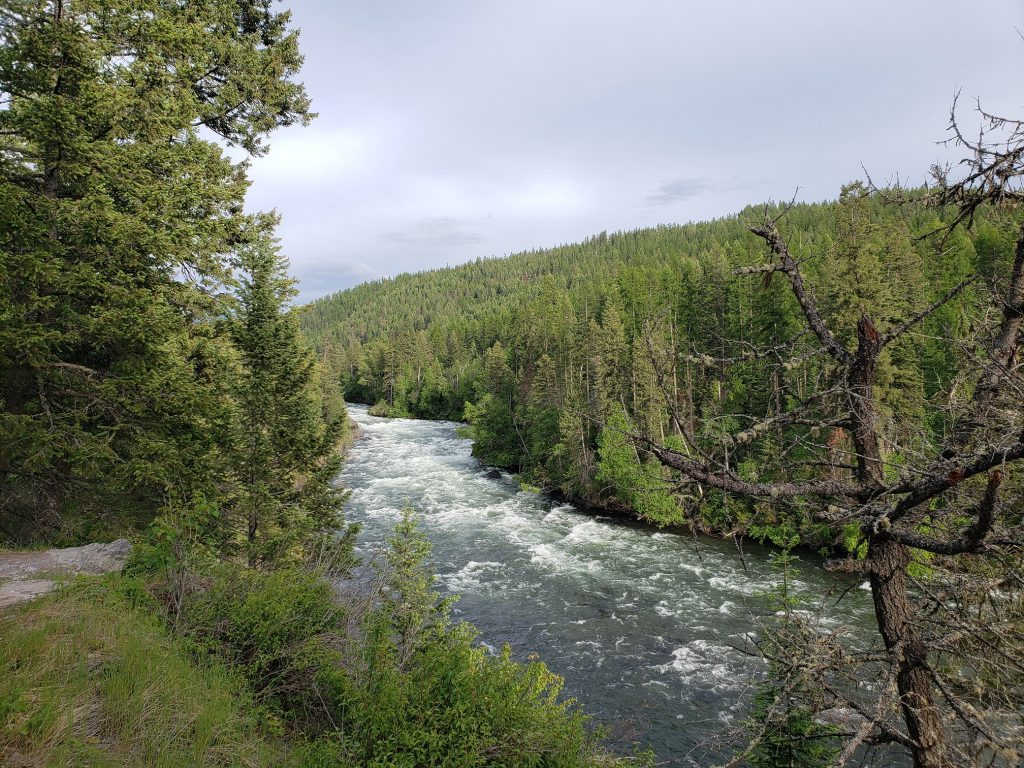 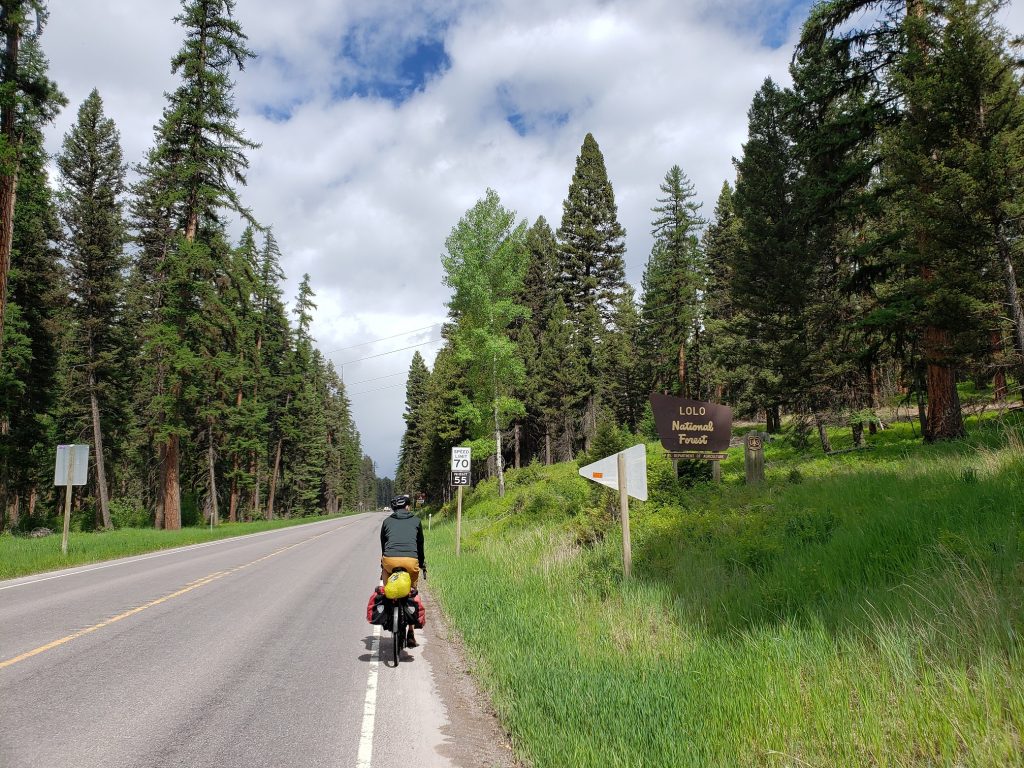 Missoula is home to the Adventure Cycling Association headquarters – a nonprofit that creates maps of recommended bike routes, hosts organized tours, and does bicycle travel advocacy. And they have free ice cream for touring cyclists!

We stopped by the headquarters and got a warm welcome – signed their guestbook and then posed for a photo to go up on their wall of bicycle tourists. We then got a full tour of their office which had dozens of touring bicycles of all eras mounted on the walls. A lot of love has gone into making their office unique and it really is worth a visit. The tour ended with a ceremonial weighing of our bicycles. Loaded up with food after our resupply day in Missoula, Donald’s was about 65 pounds and mine was about 72 pounds. Carbon fiber!

We didn’t hit the road until the afternoon, but the weather was nice at least. Much cooler than when we got into town. Highway 200 has an amazing wide shoulder and winds through pine covered mountains. Before too long we turned north onto 83 and into a stiff headwind. We ended our short day in the small town of Seeley Lake, surrounded by cabins and camping resorts, it seems this town will get crowded in a few weeks when summer arrives but for now it’s pretty empty.

Notes from Donald: “How can you trespass if you have permission? We saw what looked like dust blowing across a field, but it turns out it was pollen! I hope I can breathe tomorrow.” 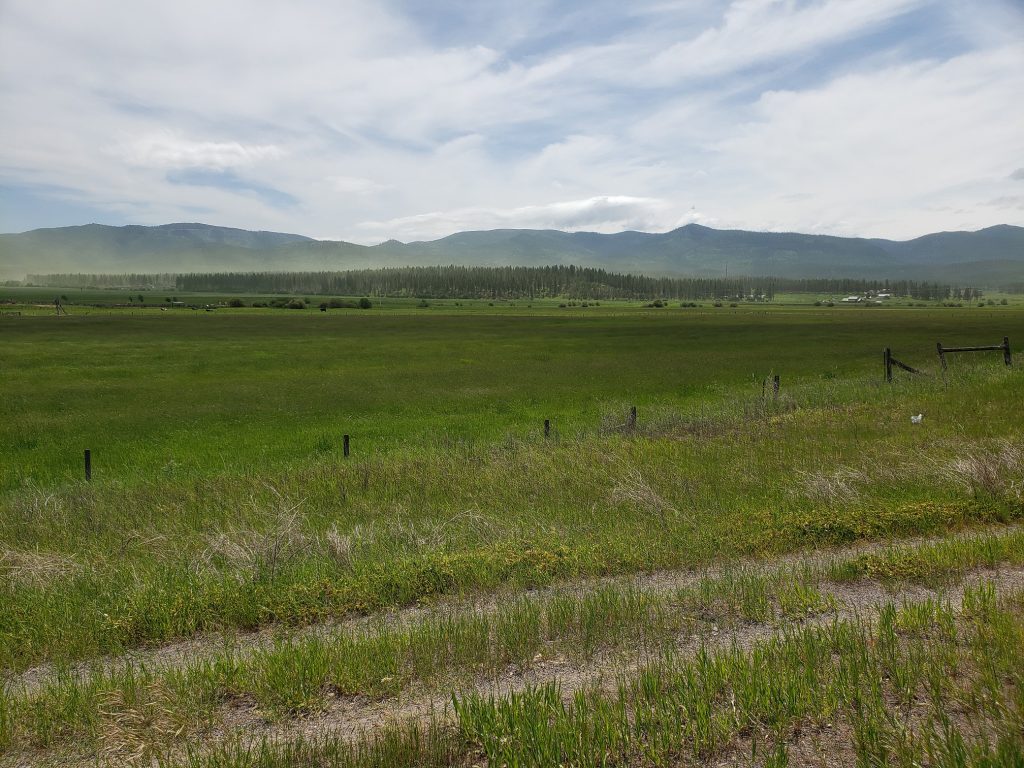 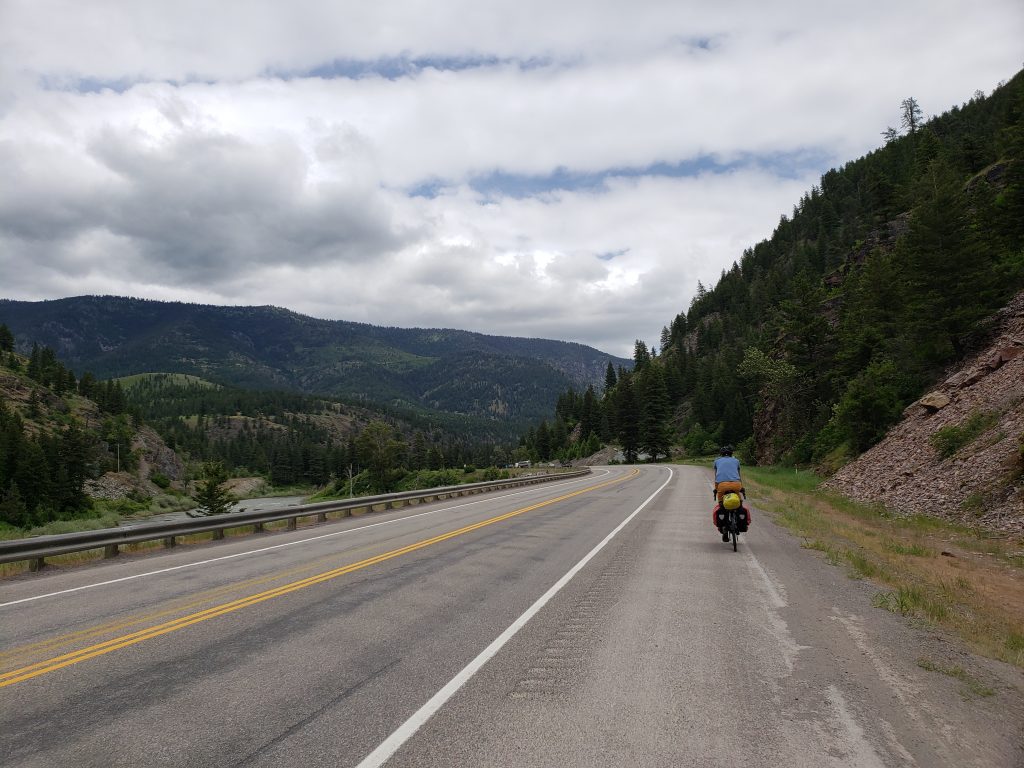 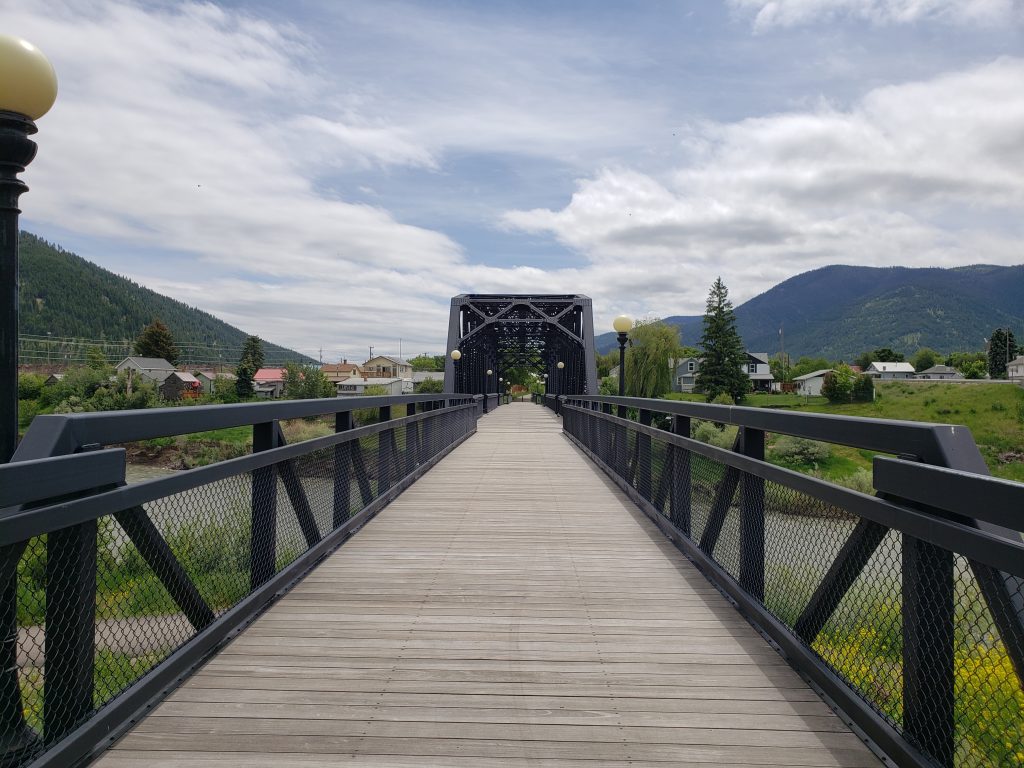 Missoula had a food truck and live music event at a park downtown. We ate good food, went to breweries, and got a new tire for Donald.

Our campground last night was on the edge of this rather enchanting valley and also at the base of Sula Peak. So clearly the only option was to climb to the top of Sula Peak to get some more appreciation of this area.

I tried to wake up at 4:45 to get to the summit in time for sunrise, but slept in until 5:45 instead. There’s a four mile dirt road to the summit but I opted to just huff it directly up the ridgeline to the top of the mountain. 50 minutes and 2,000 vertical feet later I was at the summit, having passed hundreds of piles of goat poop on the way up.

Back at camp we packed up slowly to let our gear dry before hitting the road. Often times when looking at the map to see what lies ahead, you judge a town by the number of blocks visible on the map. If there are only a few blocks in each direction, the town often will only have a post office but no motel or restaurant. Darby, the first town on our route, looked like this but much to our surprise was a thriving tourist destination! It’s a cute old western town with many shops, restaurants, and inns. We stopped at Wildflower Confections for some excellent baked goods and chocolates and headed north again.

Old Darby Road parallels highway 93 for a bit and allowed us to escape the constant stream of passing cars. However, soon after getting on the road the surface turned to dirt! The dirt is pretty well packed, but there are long stretches of washboard and gravel as well, so the going is slow. Only seeing a car every ten minutes makes all the effort worth it. A ladybug hitches a ride on my arm for a few miles and before long Donald gets another flat in the same spot on his rear tire.

We stop in the town of Hamilton for a quick bite at a brewery – their huckleberry and ginger lemongrass beers were both fantastic despite being unconventional. Besides the brewery, this town is much less fun to cycle through. We’re now in the outskirts of a larger city and the quantity of cars reflects that. The drivers on suburban roads like this are consistently some of my least favorite – for some reason worse than both city roads and rural roads. But luckily we don’t need to stay on these roads for long as there’s a fifty-mile bike path leading north from Hamilton to Missoula.

The afternoon is long and hot but at least we’re on the bike path the whole way. We stop by gas stations periodically for Gatorade – the water in our bottles has long since gotten warm. It has been my mission this trip to pick up the oddest candies I can find from these gas station stops. The reason for this is that I consider so called “energy bars” or “health bars” to be no different than candy – they’re a vehicle to get quick calories into your body when you need them, but at least candy can have a more varied taste. One of my favorites/most amusing so far this trip has been “The Crispery” fancy rice crispy treat bars that contain a whopping 800 calories to a bar! But the candy today was the first one I refused to finish – Swedish Fish Tropical Flavors were downright disgusting. Highly recommended for your worst enemy.

We finally reach Missoula, grabbed a motel in downtown and had some much-needed ramen for dinner. We’ll be taking a rest day in Missoula and will be back on the road on Thursday.

Notes from Donald: “The Old Darby Road was a nice scenic alternative to riding on the shoulder of 93. After that it got hot and I was plagued by a leaky tire. Can’t wait to replace it tomorrow!” 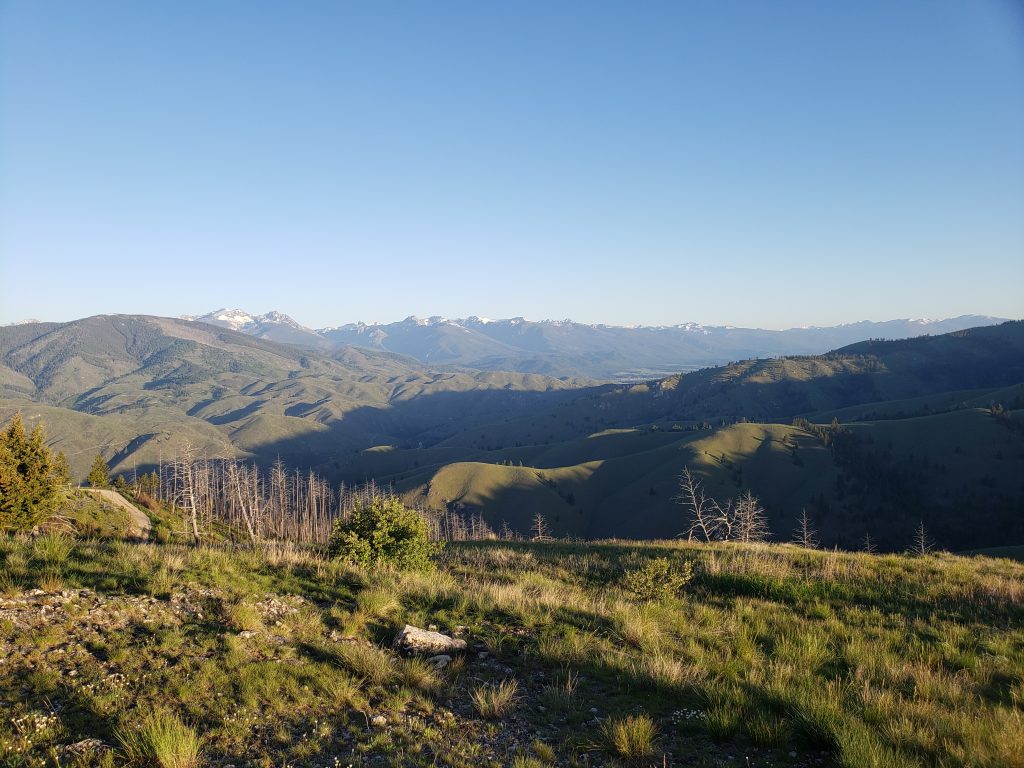 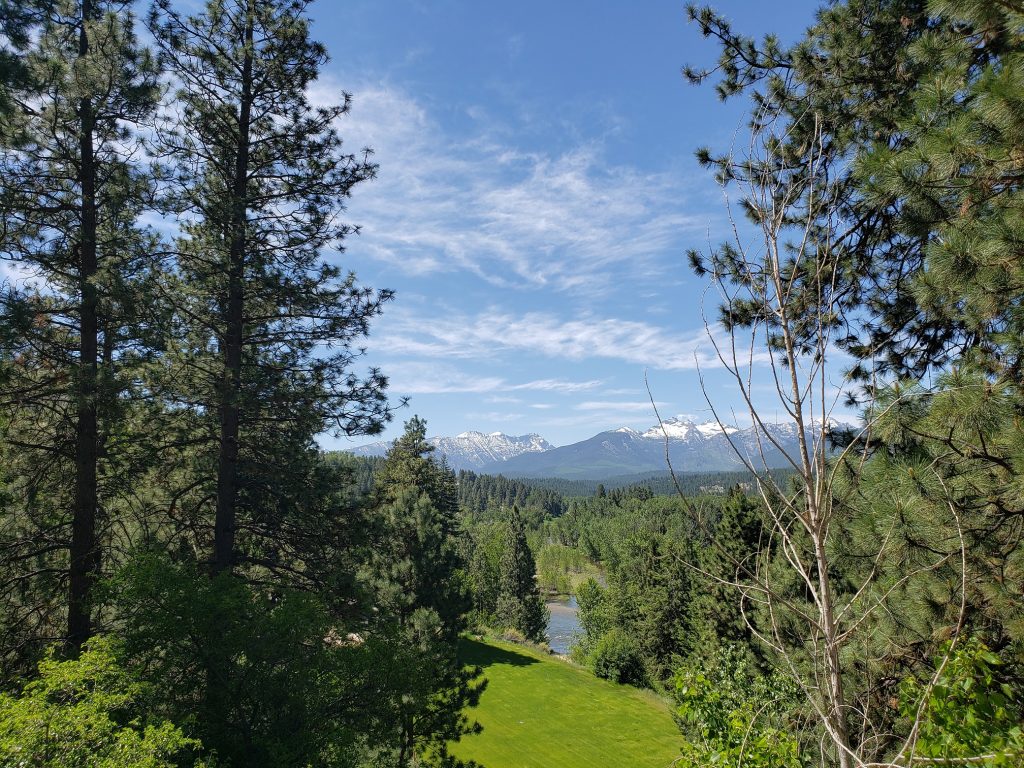 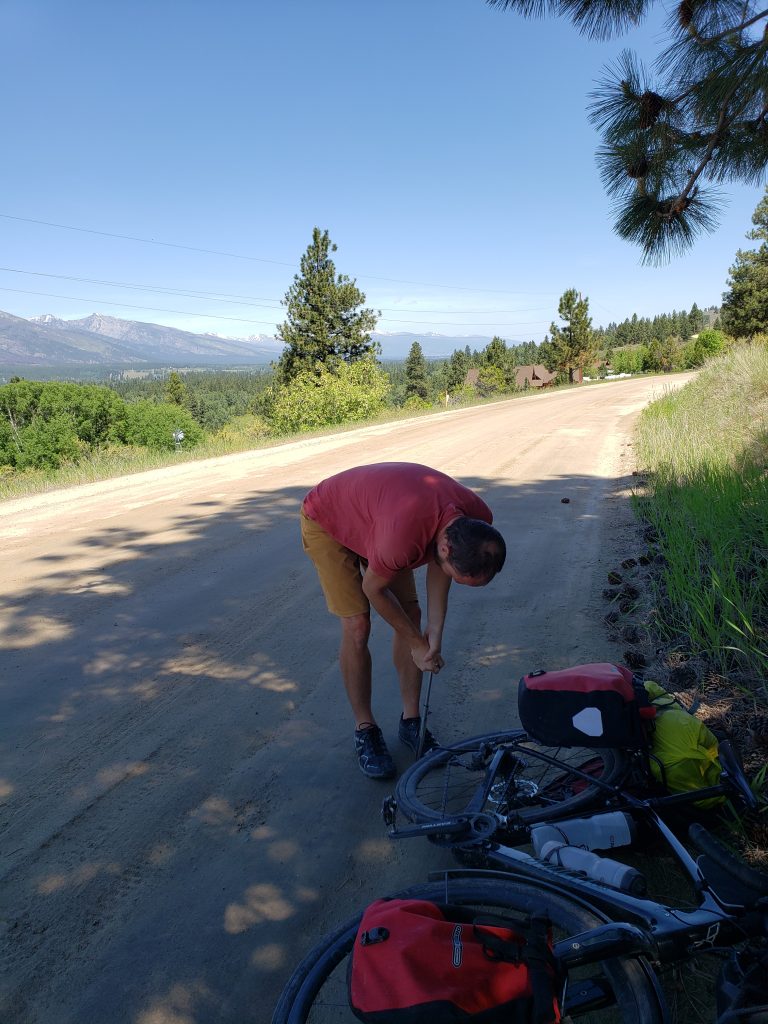 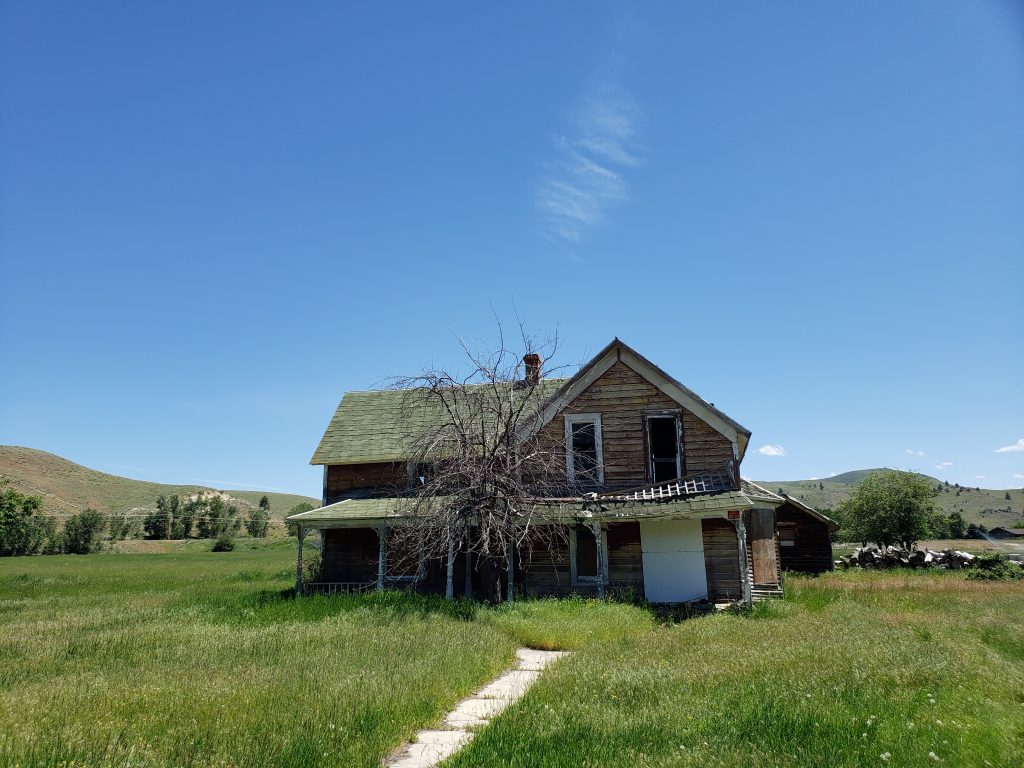