Our campground was situated at the base of a mountain with a simple route to the top and I had ambitions of getting up early to climb it. But four a.m. rolled around and there was a heavy rain falling – even if the rain stopped the rocks would be slippery and dangerous so I abandoned my plans and went back to sleep.

Morning arrived with the sun periodically peeking through the clouds and our gear was left to dry very slowly. On this kind of morning our routine goes a little like this: First, our food and scented items need to be retrieved from a tree or bear box. Water must be filled up for the day ahead after evaluating whether we need only a couple water bottles worth, or up to six liters. Then clothes. This trip I brought two shirts and two shorts for riding and I usually wear a single pair for 2-3 days before switching to a fresh set, with laundry happening about once a week. Clothes and miscellaneous gear get packed up and then the tent’s pieces – rain fly, tent body, and groundsheet get laid out in the sun to dry. If you pack them up while wet mildew can grow and ruin the tent.

Breakfast is usually a bagel and some peanut butter and Donald boils water for coffee. Then a game of chicken begins – one of Donald or I have to be the first to put on bike shorts and chamois cream, starting our countdown to actually cycling. The comfortable trail running shoes come off and the stiff cycling shoes go on, allowing the clothes bag to be closed up. Snacks are picked out for the day and make their way into the handlebar bag and all the panniers get strapped to the bike. We roll out of the campground, stop thirty seconds later because I’ve forgotten to start tracking the ride, and then we’re off.

The campsite today was only a short distance from Sunwapta Pass – we were still pretty high up – so the day had a lot of downhill in store for us. But to keep the riding from being too easy a steady headwind kept our pace in check all day. The road today followed the Athabasca River towards the northern end of both Jasper National Park and our bike trip. Glacial sediment has turned this river a milky tan color – far from the idyllic shades of blue and teal of the Bow and Sasketchewan Rivers and their surrounding lakes. The mountains up here are rugged and darker in color than those in Banff – periodic cliffs jut out of ridgelines and reach towards the sky. Not as many visible scrambling routes up these peaks.

Storm clouds drew near and just as drops of rain began to fall and clouds to the west threatened to drench us, a park lodge and restaurant came into view. We stopped for a quick lunch and got out all of our rain gear, only for the storm to skirt by to the south, missing us. While we were eating a man came up to us and asked if the bikes outside were ours. Apparently a raven figured out there was food on our bikes and managed to snag two snacks from Donald’s top-tube bag. Dirt and scuffs on my handlebars and bag revealed the raven had attempted and failed to get at my food as well.

We kept on running into bicycle tourist after bicycle tourist today – twice as many in these three days on the Icefields Parkway than the previous 2500 miles combined. Some of them are on long distance tours, but many are only cycling this road.

A few more hours of pedaling and seeing the sights and we finally reach the end of the park. Just past the park gates there was a fading sign for the town of Jasper. We were still five miles from town – was this it? We pulled over and snapped some photos but the sign and view were rather lackluster. Back on the road we reached another sign for Jasper and stopped for another round of photos. Making our way through town no better symbolic endpoints appeared so we finally high-fived upon reaching our hotel. Not quite as dramatic as jumping into the ocean at the end of a tour, but that’s how it is.

We’ll be packing up our bikes and heading to Edmonton to catch our flights. Donald is flying home and I’m heading to Europe to meet up with Jiayi. Stick around for a little conclusion post in the next few days.

Notes from Donald: “Today was bittersweet and full of mountains, waterfalls, and rivers. We are in Jasper now. The end.” 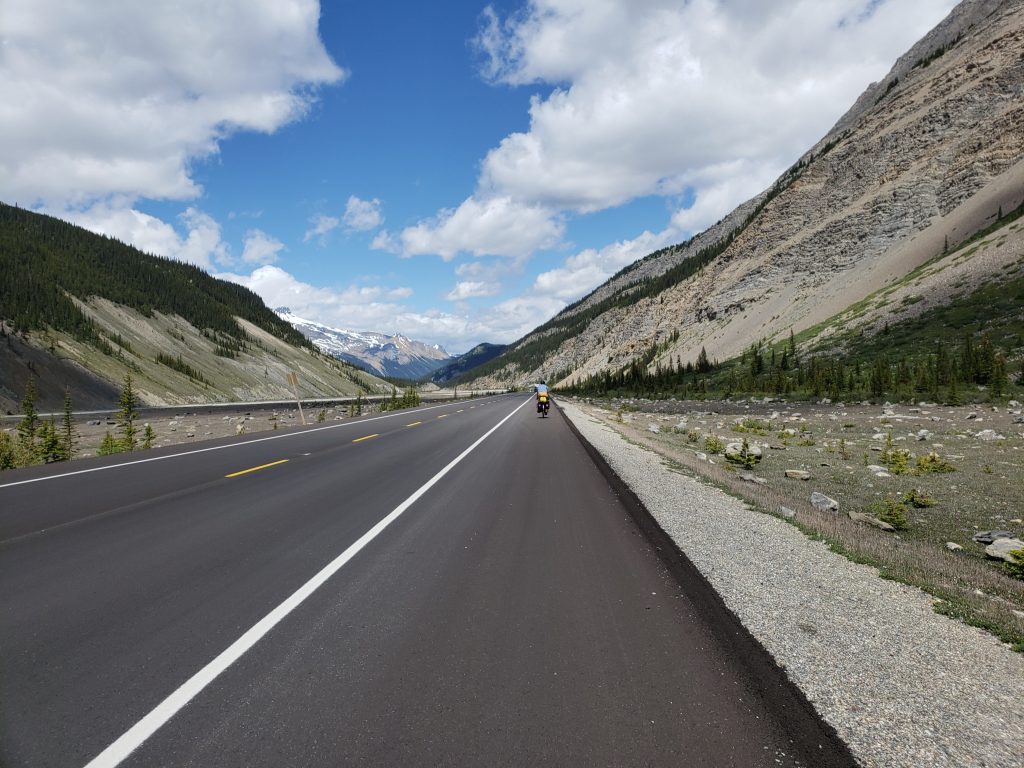 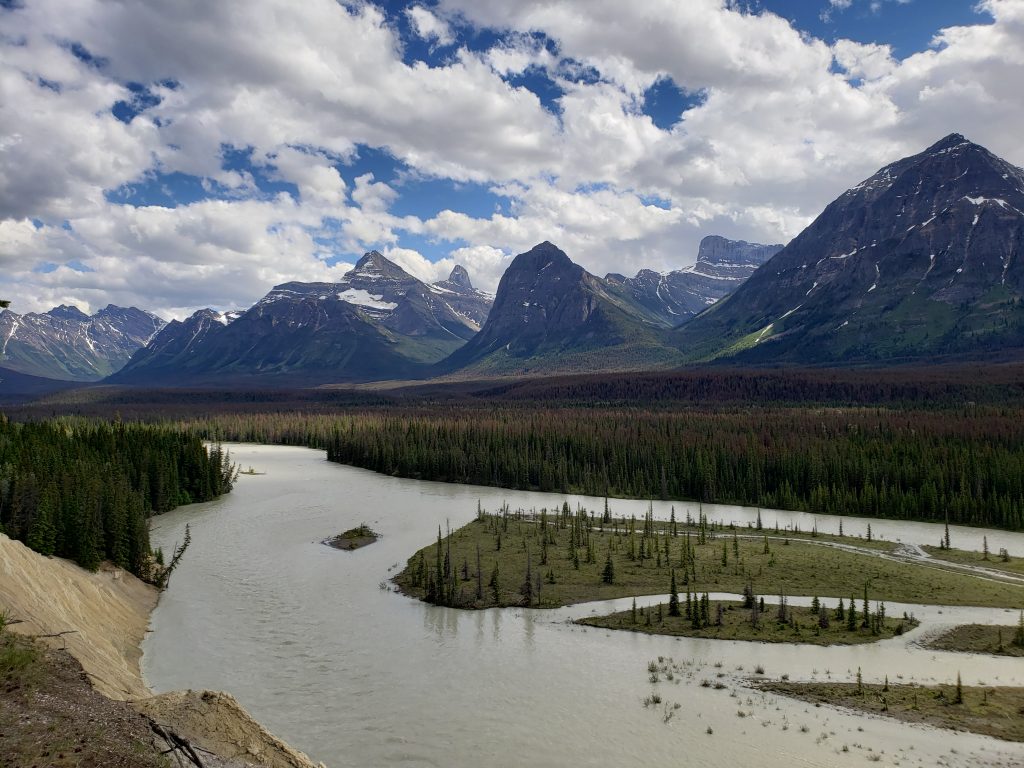 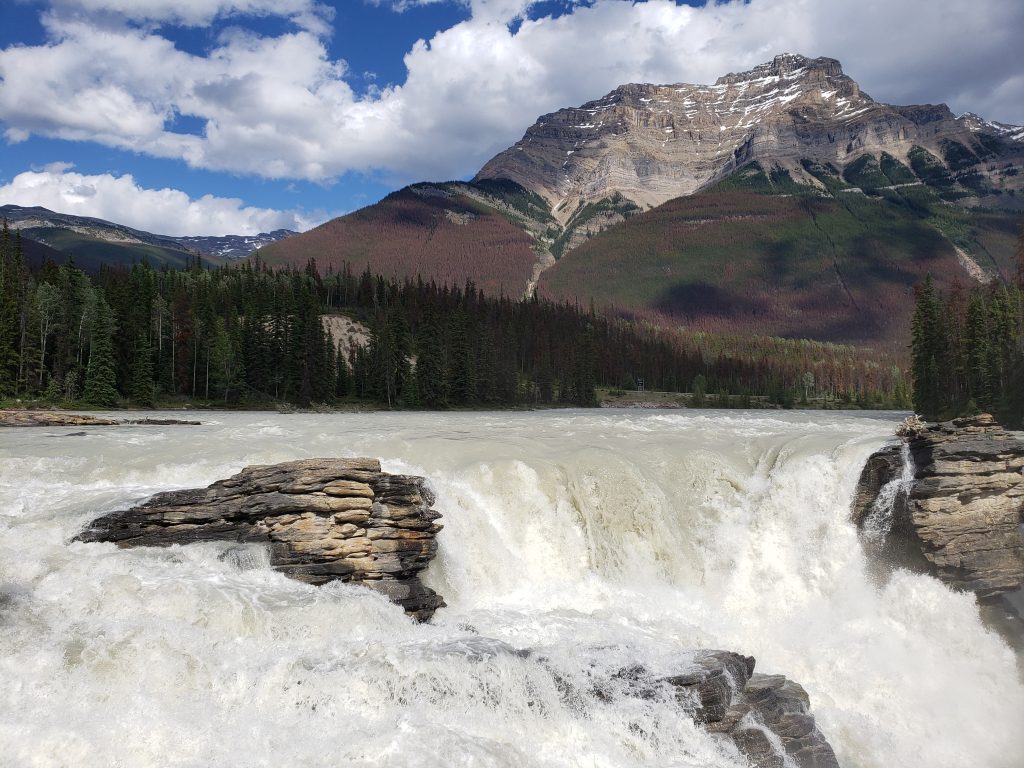 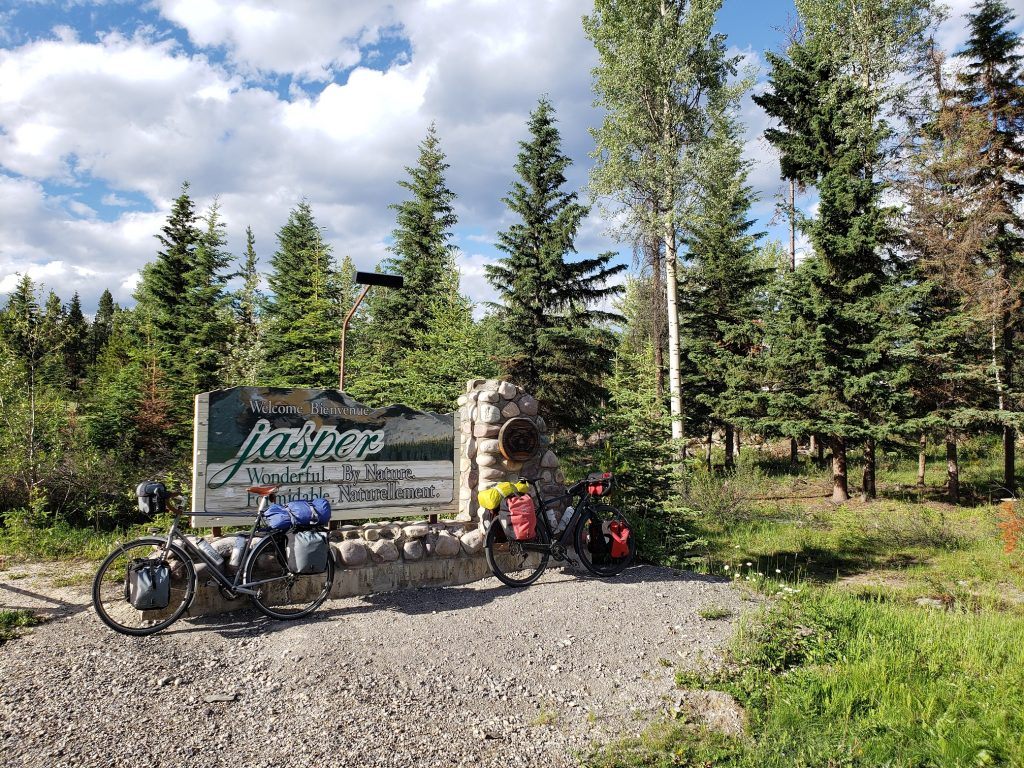